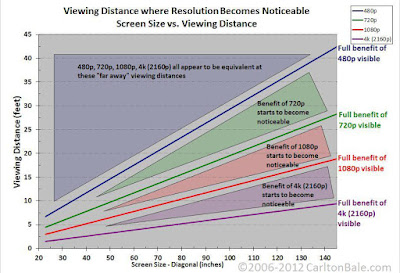 This, if it is not already, will soon be moot.

Manufacturers are already moving beyond talk of "4K" to discussing "UHD", which includes 4K, but also the more valuable and noticeable at any screen size and distance, HDR and extended colour gamut. For once, these are real, meaningful improvements over what has gone before that anyone interested in picture quality will be interested in.

If you want HDR and a range of colours that comes closer to representing the real world (and the colours available on film) you will get 4K "thrown in".

I imagine about 50 inch is about right for 4K. But I sit about 7 or 8 feet from a 40 inch TV and you can tell 1080p from 720p pretty well. Although it can be tricky sometimes depending on what you're watching.

Chris - I watch my 42in from a similar distance. I've watched some broadcast 1080p (BBC and ITV, via Freeview) and it's slightly better than the regular 1080i offered by the Tivo but not dramatically so. For me, the best picture quality I've had on my two-year-old Sony HD TV has been, in order, Blu-Ray discs, Netflix (via the Sony app), Amazon prime (also via the Sony app), TiVo HD channels. I'm happy with what I have already and won't be adopting UHD/4k any time soon.

Couldn't agree more with Chris. More and more TVs, especially high-end ones that have high-end features besides 'lots of pixels' will be UHD from now on. People won't necessarily be buying UHD TVs for the UHD aspect (which, yes, may be wasted in small TVs or in large living rooms) but because they want a good TV and most of them will happen to the UHD.

Nialli, you are missing the point with UHD. HDR/Dolby Vision and BT.2020 is what makes it genuinely the biggest thing since HD. The 4K bit is thrown in, but I agree unimportant.