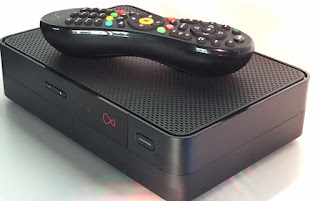 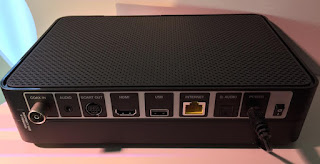 From Virgin Media:
Today we’ve lifted the cover off of our new connected entertainment line-up delivering the UK’s best and most advanced TV service. The combination of smarter, faster products and services with top-notch programmes bringing people closer to the TV they love, wherever it is.

Underpinned by our ultrafast connectivity, Virgin TV includes the new 4K-ready V6 box, which is powered by TiVo software and built for apps, and a new HD TellyTablet created by Virgin Media and designed specifically as a personal smart TV to watch television in HD quality. Virgin TV also includes a revamped Virgin TV Anywhere app, a new ad-free kids app and the unveiling of Virgin Media Store.


Our new Virgin TV line-up raises the bar in home entertainment, marrying the latest and smartest technology with the very best TV programmes, all underpinned by our ultrafast cable network. This is game-changing TV. David Bouchier, Chief Digital Entertainment Officer at Virgin Media.

The new Virgin TV V6 box is Virgin Media’s smallest, smartest and fastest box yet. It is half the size of the previous TiVo box with 10x the power and packed with a load of extra features. ﻿
The Virgin TV V6 box allows you to record six programmes while watching a seventh recording or stream from services such as iPlayer or Netflix. This increases to 12 simultaneous recordings with two Virgin TV V6 boxes.

Watching live TV, on demand programmes, or recordings doesn’t stop in the living room. The Virgin TV V6 box is designed so that recordings can be accessed and streamed on other TiVo boxes around the home. The new set-top box is completely compatible with our original TiVo box meaning that existing customers can keep recordings and transfer settings while updating their home entertainment.
Recordings, on demand programmes and live TV can be watched in one room, paused and continued in another room seamlessly through a Virgin TV V6 or TiVo box. Recordings and live TV can also be continued on a mobile device with Virgin Media’s TV Anywhere app.

The Virgin TV V6 box menu will be familiar to existing Virgin Media customers. It’s powered by the very latest, intelligent TiVo software and has been built for apps which, in combination with the powerful technology inside the Virgin TV V6 box, mean that its image-based menus are superfast to navigate and apps such as iPlayer, Netflix and Vevo will open with lightning speed. It also includes smart search and SeriesLink+, which pulls TV programmes together into one place, allowing Virgin Media customers to easily access the great range of programmes on Virgin TV wherever they are hiding.

The Virgin TV V6 remote is smaller than the existing remote but will be instantly recognisable to Virgin Media customers so there won’t be any barriers to getting straight to the best TV. A new search button on the remote instantly fires up the TiVo brain meaning there are fewer clicks to the TV users want.

The RF remote now works even when the new set-top box is tucked away in a cupboard. Plus, if it’s ever lost, there’s a button on new set-top box which will make the remote beep so it can be rescued from the depths of the sofa.

1Tb. I'll post more details as I find them. As you can share content between TiVos in the same home if you have two 1Tb TiVos you'll have 2Tb of shared storage.
The immediate wins I'll comment on are:
Faster box
Available to existing customers "immediately" (I'll believe that when they knock on my door with one!)
No ongoing monthly charge (but I expect that'll be another of those price rises we're so accustomed to)
On first glance the lack of 4k content was a predictable one. I'll post more on the tablet and other announcements over the next few days. If you can't wait there is coverage on the announcement out there but no reviews yet. http://www.whathifi.com/news/virgin-announces-v6-4k-tv-box-january-2017?utm_content=buffer962a5&utm_medium=social&utm_source=facebook.com&utm_campaign=buffer

I was a bit let down by this when I read the BBC coverage. useless as usual. But you have softened the blow a little. I was hoping for the streaming for the other rooms feature and watching recordings on phone or tablet but bbc never even mentioned it. instead they said sky did it and virgin didn't.
This looks pretty good now but let's see how it all performs first.

1Tb is a joke. VM should have at least matched the 2Tb that Sky Q offers. Faster box? Well I should hope so, we all know the current TiVo is unacceptably slow. The only good thing is the number of recordings at the same time, but surely when 4k comes that 1Tb is going to fill up quite rapidly. Seems like I'll be ditching VM TV for Sky, but I'll keep the broadband.

I'd actually consider sky for my tv too but I live in a flat that cant have sky and im not having bt or talktalk so I'll be getting one of these boxes.

My current TiVo is 92% full - would I lose all the (just short of) 200 recordings if upgrading.

There has to be some sort of solution?

"The new set-top box is completely compatible with our original TiVo box meaning that existing customers can keep recordings and transfer settings while updating their home entertainment."

Is Virgin going to contact all of us 'existing' customers to offer the box? I seriously doubt it.. As Nialli (above) already wrote, I suspect that another £3.99 or £4.99 hike is on the horizon for February next year. Watch this space..

Is it me or has the current Tivo box slowed down since the last update? To encourage us to upgrade or am I being cynical? there seems to be a lot more pauses between menu screens.

You can't watch recordings from the app it only says watch on tv when u click onto a recording.

Dan- you can't stream recordings unless you have a V6. The current TiVo can't do it

Mike Rogers said...
"The new set-top box is completely compatible with our original TiVo box meaning that existing customers can keep recordings and transfer settings while updating their home entertainment."
If that's true I'm not sure how they're going to do it. Any ideas? An engineer hanging around waiting for 1Tb to copy from one box to another isn't going to happen, I'm sure.

In terms of the "compatibility with previous boxes", I assume that you'll just be able to leave your old box plugged into the mains and network and then stream recordings from there to the V6.

My initial thought on all of this was I really hope it's better than the multi-room streaming they brought out a couple of years ago, as there was pretty much nothing on that which they actually had the rights to stream from one box to another. However, I thought I'd just give it a try to see if the situation had changed in the past year and, to great joy, found that I could now stream all the content on my backroom Tivo to the front room one (or certainly, everything I tried - in the past, almost everything was locked down).

So, given this, I can certainly see how I could upgrade one of my current boxes and then still keep the old box around as a "source".

I really like the idea of the extra speed, but as one of the commenter's above, I'm not really fussed about the apps. Having grown old waiting for Netflix from the Tivo in the past, I bought a Fire TV stick for one room (and have an XBox One in the other). Bizarrely, the thing putting me off the most is the RF remote. I'm very happy with the Logitech Harmony remotes that I've got, which include an RF controlled "IR blaster" allowing me to put the Tivo, receiver, Xbox, etc. in the cupboard. I assume the RF from the Tivo remote won't be compatible with my current Harmony, so I'd actually end up in a worse position (unless the new Tivo also has an IR input too, of course).

God it is ugly isn't it.

Ditched Virmin Media two years ago due to persistent price increases and non existent or rubbish content. This year dumped Sky. Exodus is the way forward for content.

And what content will we watch if we all do that and the media companies have no revenue to be able to produce content?

The idea generally would be start charging fairly before that happens.

Ed,
I found a VirginTVV6boxfactseet PDF on the web that says "IR and RF4CE remote control" in the list of features, so the box may have both IR and RF remote capability.
I sure would like to get this confirmed before I place an order for one though, as I am in the same situation as yourself and would see it as a backward move to loose my Harmony Remote control of the box.